More and more people are returning to Ripertoli for a second, third & even fourth visit. This section of the website is an attempt to keep you up to date with the things we have done to improve the property over the last few years.

Firstly, the inside: In 2016 we installed air conditioning in the main house. It is quiet and unobtrusive and effective. It was such a success that we have now (2017) just finished installing it in the capanne. We currently are making an extra charge for this as electricity is very expensive in Italy and we have no idea what the increased cost will be. It also gives an incentive to use it sparingly and save the environment a little.

As for outside, we have moved the shower by the pool so it does not obstruct the view and we have installed a small kitchen by the pool so you can enjoy cold wine and beer and wash up there, leaving the plastic â€śglassesâ€ť where they are needed. 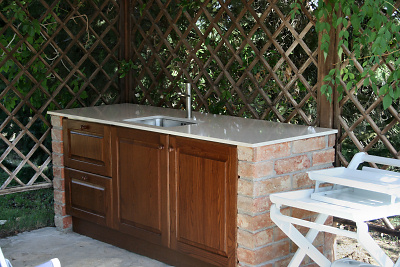 Small kitchen in the gazebo beside the pool

We have also done two other things to improve the pool. The first in spring of 2016 was to install an electric pool cover. This makes it easy to keep the pool warm overnight when the temperature drops and makes the pool totally child safe â€“ as long as the cover is on, obviously. Secondly, we have been so impressed by the heat pump that runs the air conditioning that we have installed a heat pump for the pool (2017). Somehow the solar panels were not as reliable as we had hoped and the heat pump should make a big difference to the water temperature in the spring and autumn.

The drive! As any previous Ripertoli customer will know the road through the vineyard has at times been a bit of a challenge. Major storms have often caused erosion of the unmade-up surface and although we have tried to maintain it, it was often a bit bumpy (to say the least). So, this year (2017) we had the surface concreted. There should be no more problems. 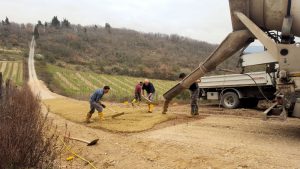 Marcello & crew concreting 50 metres of the drive through the vineyard.

And finally, for the major works of 2017, we have had the property fenced. Increasingly vineyard owners have fenced their properties to keep out the deer and the wild boar. And so, more and more were coming to Ripertoli, the deer to eat the young olive shoots, and the wild boar to dig up the irrigated lawns when the weather is dry in summer. Boars are actually quite dangerous and they were coming nearer and nearer to the house. We decided to complete the fencing with a cattle grid at the entrance so guests can drive straight in without having to open the electric gates. Cattle grids are unheard of in Italy so ours was made in the UK and imported! 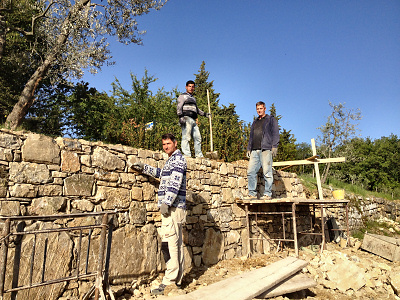 We have started work on the dry stone walls â€“ a whole one near the house was rebuilt 3 years ago and looks wonderful â€“ just another 10 or so to go.

In January 2018 we had the entire roof structure of the main house re-built, to make it 100% watertight and to improve the insulation (cooler in summer, warmer in winter). This involved scaffolding all round the house, so we took advantage of it to re-point all the walls & get rid of the ugly chimney at the back. It looked amazing when it was done ! Here are some photos of the job being done and the brilliant workmen, and also a couple of views that we will probably not see again in our lifetimes. 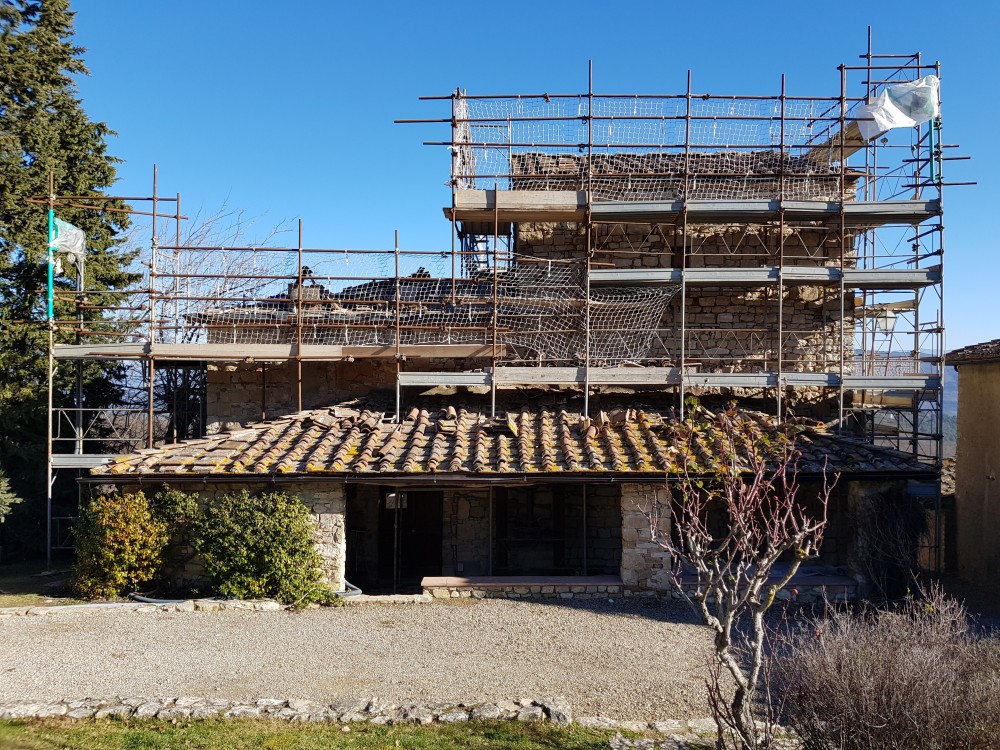 Ripertoli with scaffolding January 2018. The roof was totally rebuilt with anew layer of insulation under the old tiles, and all the walls were beautifully re-pointed. 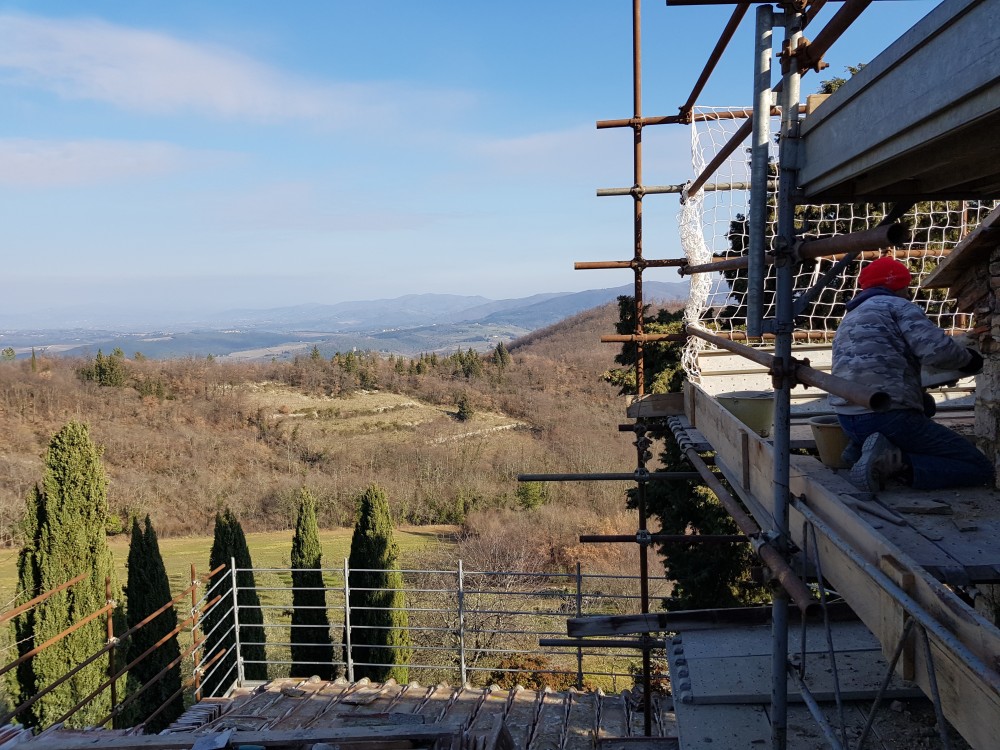 View to the north from the rooftop – you can almost see as far as Florence, 20 miles away. 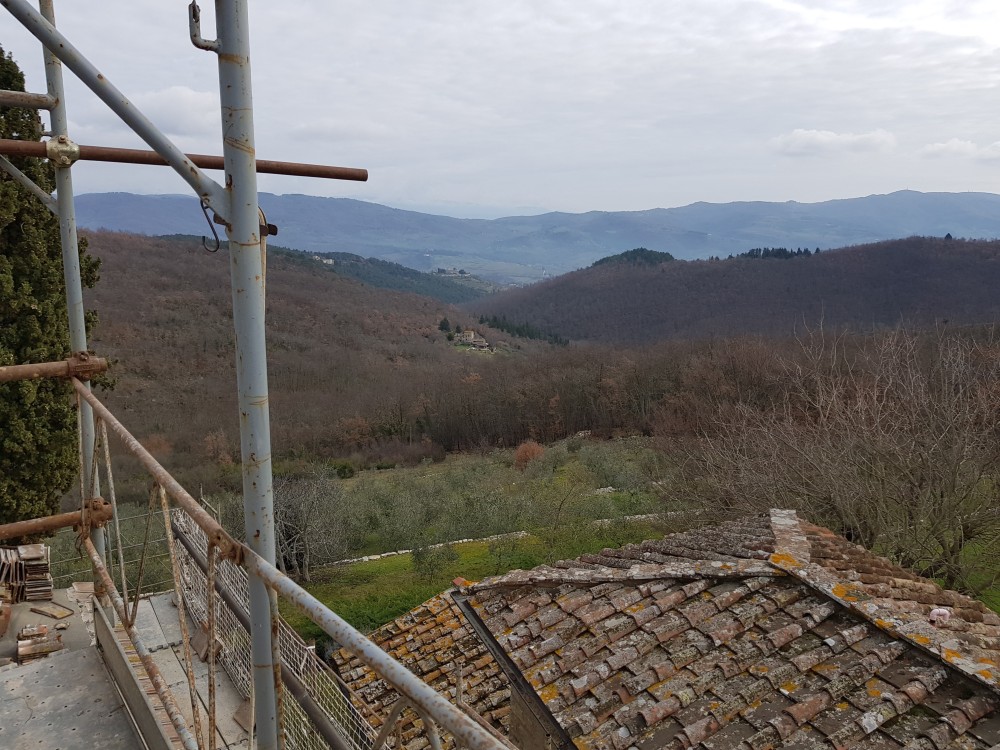 View to the east from the rooftop. Nearest neighbour Le Gialle in the centre, Colognole above it another mile away.

The building works were done by our wonderful builder Marcello Bonechi who has taken care of Ripertoli for us since 1988, pictured here with his son Enrico. 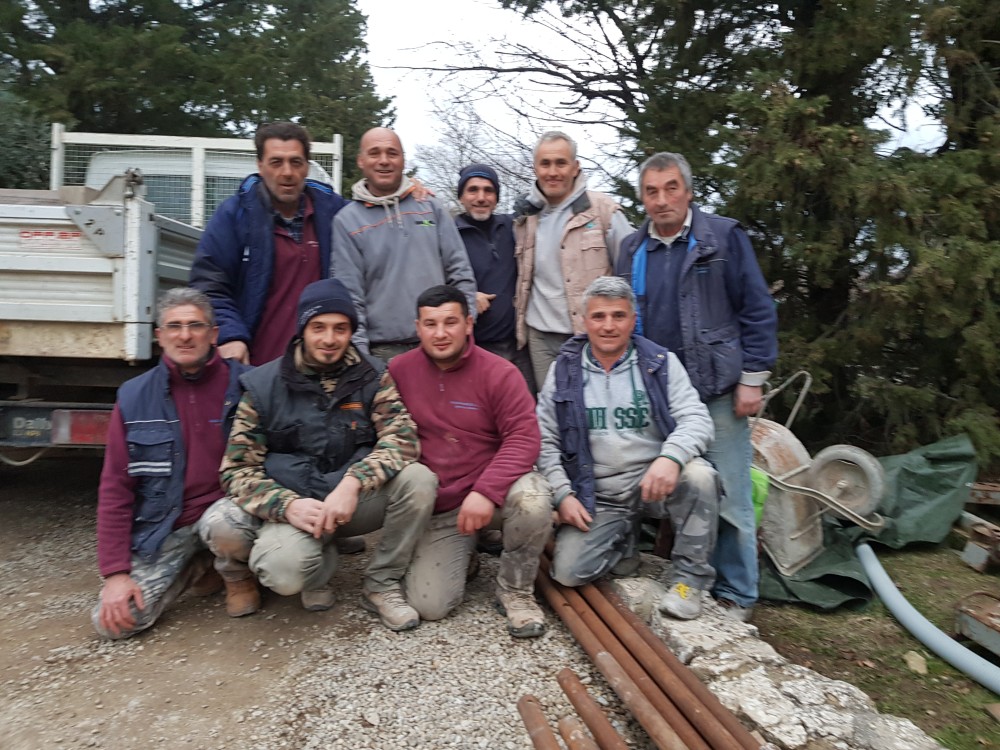 Marcello’s team of builders who did a labour of love to make Ripertoli as beautiful as possible as well as watertight.

Ripertoli continues to flourish, Marisa continues to welcome our guests with affection, and we look forward to another happy season.